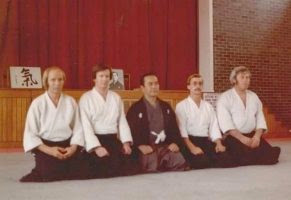 Today I received the sad news that my Sensei had passed away yesterday. Sensei Mike Muspratt, seen in the photo above.(left)

So excuse my indulgence as I give a few reminiscences here.

It was in the late seventies that I came across him teaching Aikido in Watford. I was searching....knowing there was something spiritual I was looking for. My friend and I had numerous discussions about what we 'stood for' and we got into lots of situations against gangs and bullies and hooligans but also thought that the paths we were leading wouldn't end up somewhere nice. So we were searching....both of us. I could only word this something as chi at the time. I had studied a few martial arts and my friend was a very competent boxer but he found that it was easy to hurt people and take blows but seemed pointless now......there must be something else.

So one day he came to me and said he had found a guy who seemed to be what we were looking for....in Watford of all places....and there was me saving to go to Japan or China. I said I would come that night and he said that you have to have an invitation and meet the guy first. Well, I was in such a state of mind shall we say that I said no, I'm coming....he'll have to throw me out if he don't like it. 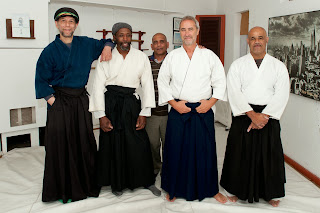 Well, I went, got changed, joined in....asking nobody. I just followed what everyone was doing. Then out came the teacher from a little side room and everyone stopped and sat seiza. I followed the rituals as best I could, hoping he wouldn't notice me. Then the class began.....long warm up then Aikido. I remember the first strange thing I saw was someone doing unbendable arm. I went straight to him and asked him to show me. Wow....I gotta learn this. Inside I was up and running.

Meanwhile I was aware, I thought, that he still hadn't noticed me and so to me my plan was working. Anyway....come the end of the lesson everyone started getting changed and my friend said that some stayed for tea afterwoods. Then shock, horror, I saw the teacher heading my direction. "This was it" I thought,"now for trouble". I braced myself for the oncoming telling off or worse and felt like I was ready for anything...."I don't care!" Mike approached and as our eyes met he just smiled. Woah....I felt like an iceberg melting mixed with a balloon deflating. He asked my name and asked me if I would like to see something. I said yes and he went and picked up a broom. He held the handle and told me to grab the brush end. Then he told me to use all my atrength to push him over. I laughed and thought "easy!!!" and proceeded to push. "Huh???" That didn't make sense. So I pushed using both hands and all my body weight and all it made him do was proceed to stand on one leg yet it felt I was pushing against a mountain.....impossible. Yet the effect on me was like a light had been switched on. Anyway he then asked if that was the direction I wanted to go and with eyes wide I almost shouted "yes!!!" at which point he said that I was welcome. Phew! What a mind blowing, life changing experience on that first meeting. 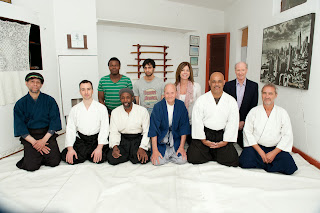 Mike had broken away from from the Aikido organization at the time and decided to call his Aikido Zen Shin Kan. He told us that people refused to meditate and use Ki and they were going the wrong direction. He had met and trained with Tohei Sensei and had decided that the principles of Shin shin Toitsu, the format, would be his way of teaching yet once again not as a member of the newly formed Ki Aikido organization. So his way was teaching the principles of such yet really only quoting and demonstrating the words of Ueshiba and sometimes other Japanese he had trained with....Noro seemed to be his favorite.

Mike was very spiritual yet very zen....no messing....his Aikido was soft yet fierce. Zen definitely suited his way. With the sword......unsurpassed by any I have seen. Also very zen like he had the knack of knowing what was on your mind and giving you a relevant puzzle to solve.

I remember one occasion early on when people from another dojo came as he had let them use his dojo. They were from a yoshinkan dojo. Apparently there had been some kind of trouble and a so called fierce Teacher from Japan had been overstepping the mark and damaging students. So Mike let them come to our dojo and sure enough they then reported how said teacher was furious. Typical Mike...he told them to tell him to come down the following sunday and bring his sword. Magically that ended the problem.

Ahhh, too many memories and stories and experiences. 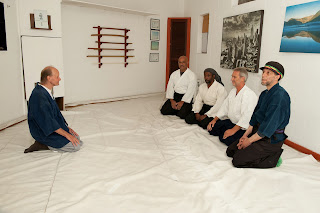 Posted by graham christian at 15:56